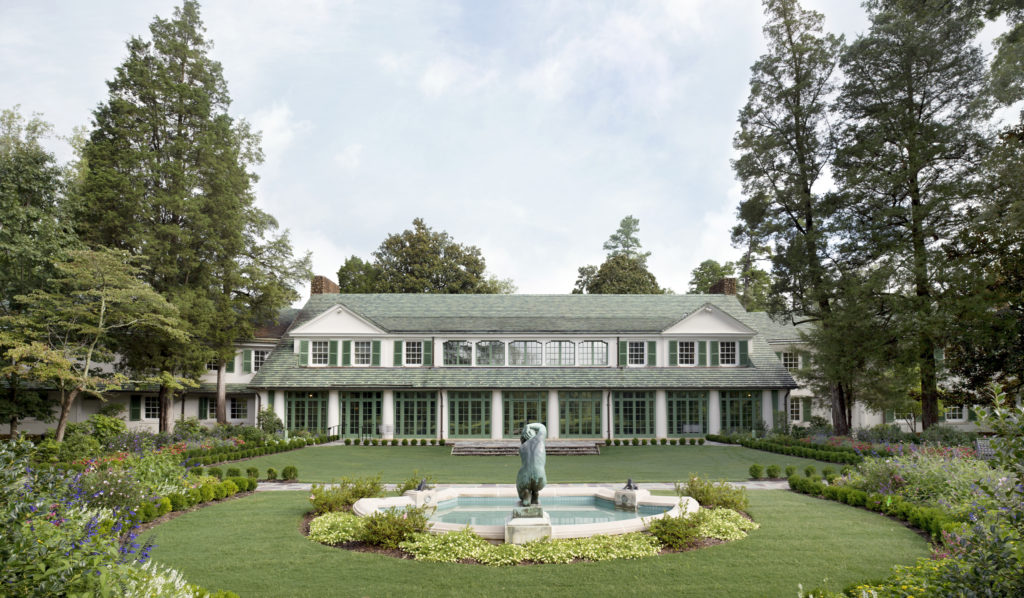 The Junior League of Winston-Salem, Inc. (JLWS) began as a result of a meeting called by Mrs. J. Edward Johnston (former widow of Richard J. Reynolds, founder of the R.J. Reynolds Tobacco Company) on January 13, 1923. About 40 young women met at her house at Reynolda. They were advised that they should devote time and energy to social service. Mrs. Bess Gray Plumly called the group together a few weeks later, and Miss Marian Blair suggested that the group apply for membership in the Association of Junior Leagues of America, Inc

On March 23, 1923, the Junior League of Winston-Salem (JLWS) became the 46th in the Association and the first in North Carolina. Throughout its history, the JLWS has devoted its efforts to strengthening families, and through voluntarism, has affected change in the Winston-Salem community. The following is a sampling of the tangible differences the League has made throughout the years:

1920’s: Opened a gift shop; sponsored a prenatal clinic; began a Hospital for Incurables; and formed a Children’s Play Committee.

1930’s: Began the Newssheet; instituted a placement system; opened the Rag Market (later the Thrift Shop); helped to organize the Civic Music Association; assisted in the organization of the Mental Hygiene Society of Winston-Salem; financed a Child Guidance Clinic; brought to town four New York Dramas of the Contemporary Theater Series; and collaborated with other community groups to form the Children’s Theater Board.

1960’s: Hosted the 1960-61 Regional Conference; sponsored the first JLWS Follies; started the Nature Sciences Center (renamed SciWorks); donated paintings and other works of art to schools, hospitals, and other buildings frequented by children; assisted in the production of the first Christmas ballet, “Nutcracker,” produced by the N.C. School of the Arts and the Civic Ballet; and financed and compiled an Information and Referral Directory for the Volunteer Bureau.

1980’s: Assisted in the development of promotional materials for the new Roger L. Stevens Center for Performing Arts; published Words of Winston, the JLWS’ magazine; initiated the Battered Women’s Services, Inc, Child Abuse Puppet Show and the Winston-Salem Enrichment Center; purchased the Timothy Vogler House and continued its renovation; helped establish the Rainbow House of Winston-Salem, Inc. (renamed the Ronald McDonald House of Winston-Salem); received the 1987-1988 Volunteer Organization of the Year Award from the United Way and the 1988-1989 Governor’s Award for Outstanding Volunteer Service.

2000’s: Hosted the Lexus Champions for Charities Golf Tournament; sponsored the inaugural Komen NC Triad Race For the Cure® (with the four founders being JLWS members); sponsored Student Votes Count! for Easton Elementary school; introduced the Community Volunteer Awards; initiated a Community Leadership Coalition with community agency representatives; hosted the inaugural NC Joint Board Retreat; funded a paid Grant Writer position within the League; introduced the Exceptional Speaker Fundraiser; received the 2003 AJLI/BMW Community Impact Grand Award for the READ TO ME program; expanded JLWS’s focus area to target issues related to adolescents under a program called MENTOR ME; opened the Children’s Museum of Winston-Salem; debuted the Tour of Fine Kitchens (renamed Tour of Fine Spaces); partnered with Forsyth Medical Center to bring Girls on the Run to Forsyth County; reprinted Stirring Performances cookbook; recognized by the WSFCS for 25 years of performing the Child Abuse Puppet Show and for creation of a vignette addressing internet predators; implemented a community application process for placement opportunities; purchased and built a playground for the children of My Aunt’s House in honor of the JLWS’s 85th anniversary; redesigned the JLWS website; implemented an historian position with JLWS archives moved to the Central Library; and moved to a two-tier Board structure with separate management and governance functions.

2010’s: Expanded focus areas to include women’s health and implemented the Women’s Health Advisory Group to lead those efforts; debuted Boutique Holiday shopping market as a fundraiser; recognized along with the other Junior Leagues across North Carolina with 2010 NC Children’s Lifetime Legacy Award by the Action for Children North Carolina; celebrated the final Rummage Sale at 65 years; created the Sustainer Council to provide meaningful engagement opportunities for our lifelong members; received the Donna Lambeth Children’s Champion Award for the vision and investment in the Work Family Resource Center for increased child early education opportunities; envisioned and created BookWORM, a program designed to allow all children access to books; partnered with Kimberly Park Elementary School to host the first health fair; launched Strong Women. Strong Families and we are excited for so much more to come!

For more than 90 years, the JLWS has served the community through volunteering, fundraising, advocacy, and education. To view a complete list of past projects, visit our Programming History page.

Donate to the Annual Fund

Annual Fund donations go directly to our existing programs and partnerships as well as investing in new opportunities. We’d like to encourage all members and friends of the League to donate to the Annual Fund. Click here to make a donation online!

By continuing to use the site, you agree to the use of cookies. more information